Professor Shi Nguyen-Kuok (Nguyễn Quốc Sỹ) was born on February 20, 1967. He graduated high school education in 1983 with honors. In the same year passed the state examination for admission to higher education and at the end of the contest was selected for education in the Soviet Union. From September 1983 to June 1984 studied Russian at preparatory faculty of the Institute of Foreign Languages in Hanoi.

In August 1984, came to the Soviet Union and entered the first year of the electromechanical department of the Leningrad Polytechnic Institute (now the National Research University “St. Petersburg State Polytechnic University” – NRU SPbPU). While studying at the Leningrad Polytechnic Institute actively engaged in research work in the field of physics and technology of Low-temperature Plasma and participated in student scientific conferences. Received encouragement awards from the Academic Council and Rector of the Institute and certificates of honor from the Leningrad City Council for successful participation in the study and research work repeatedly.

In 1989 he graduated (one year earlier) with honors the degree of M.Sc. in the Leningrad Polytechnic Institute (NRU SPbPU) with specialty – Power Electric.

Since 1989 worked as an assistant at the Department of Electrical Engineering and Technology, in laboratory of Plasma technique and technology at the Leningrad Polytechnic Institute (NRU SPbPU).

In June 1992, he successfully defended his doctoral thesis on the theme “Simulation of the interaction between flow solid particles and plasma” and has been awarded the degree of Ph.D., specialty – Electrotechnology.

According to the results of a competition organized by the Scientific Council of the NRU SPbPU, this work has been recognized as the best in 1992 and Shi Nguyen–Kuok was selected for further study at the postdoctoral in the NRU SPbPU.

In March 2002 the dissertation work for the degree of Doctor of Technical Sciences (D.Sc.), specialty – Electrotechnology on the theme “Investigation of the Induction and Arc Plasma Torches” was successfully carried out at the NRU SPbPU. The results of the work were estimated by the Higher Attestation Commission of Russian Federation and the work has been recognized “as the best of the defended dissertations in 2002 and that has the great importance for the national economy”.

Since 2003 is a Professor of the Department of General Physics and Nuclear Fusion at National Research University “Moscow Power Engineering Institute” (NRU MPEI). Under the guidance of Professor Shi Nguyen–Kuok, new courses for teaching students and a new Laboratory of Plasma Physics were created at the same University. Currently, the Laboratory of Plasma Physics serves as a base for training undergraduate and graduate students of specialty – Fusion Reactors and Plasma Systems (direction – Nuclear Power and Thermal Physics).

Experience of scientific and pedagogical work of Professor Shi Nguyen–Kuok is 30 years.

In NRU “MPEI” prof. Shi Nguyen–Kuok teach the lectures “Mathematical methods of plasma physics”, “Mathematical modeling of sources of Low-temperature plasma”, “Transport processes in plasma”, “Computer Technologies in Science and Education”, “Plasma Technique and Technology ”. The course focuses on the description of the main methods of mathematical modeling of Low temperature plasma and plasma processes in the Electrotechnological plasma torches: Radio Frequency induction (RF) plasma torches for the treatment of refractory particles, spectral analysis and processing of hydrogen sulfide gas, arc plasma torches of open type for melting and welding, arc plasma torches of the channel type for cutting and spraying for plasma chemistry and treatment of materials surface. For students from Republic Myanmar, training on the master’s program, teaches courses “Plasma physics and controlled nuclear fusion”, “Kinetics of Low-temperature plasma”, “Statistical physics and quantum phenomena.”

Prof. Shi Nguyen–Kuok is a head of Laboratory of Plasma Physics in National Research University “Moscow Power Engineering Institute” from 2005. Under the leadership of Shi Nguyen–Kuok new laboratory stands were manufactured and tested, textbooks for the study of plasma processes in electrotechnological RF and Arc plasma torches were published.

Prof. Shi Nguyen–Kuok – Scientific Supervisor of “Technokeramica” LTD since 2011. Under the guidance of Shi Nguyen-Kuok, installations and a technological process for the processing of refractory powders in the RF plasma torch were developed.

In 2006 prof. Shi Nguyen–Kuok received a grant from the President of the Russian Federation “Conducting research by young scientists.”

In 2012 prof. Shi Nguyen–Kuok took the first place in the competition of manuscripts of scientific literature NRU “MPEI” and received a grant for the publication of a scientific monograph “Basics of mathematical modeling of Low-temperature Plasma.”

In 2013 by led by prof. Shi Nguyen–Kuok, RF plasma installation of high power 1000 kW/0.44 MHz for the treatment of refractory particles and for test mode heating materials in the plasma jet, was prepared and released in work (Obninsk, LTD “Technokeramika”).

In 2016 prof. Shi Nguyen–Kuok participated in the creation of VinIT Institute of Technology and was elected President of the Management Board of VinIT.

In 2018 prof. Shi Nguyen–Kuok was elected Director of the Institute of High Technology in Vietnam.

Prof. Shi Nguyen–Kuok is a full member of the Russian Academy of Electrotechnical Sciences since 2015 and the International Academy for System Studies since 2012. 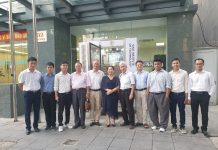